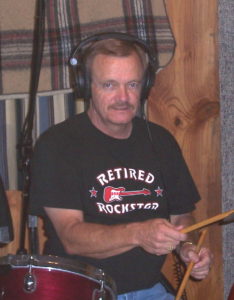 My involvement in music began in the 1st or 2nd grade in the Honey Grove Elementary School Rhythm Band. At least I think that is what it was called. I will try to find a picture of that little group to post. At about the 5th grade, I began the school band program. My first year was spent trying to learn to play the clarinet, because my older brother already had one that he had played for a while. After the first year, the band director, Mr. Tommy Nugent, wisely decided that I needed to change to the trumpet. That seemed to fit much better, as I stayed with that through high school. About my freshman year in high school, Mr. Nugent put together a jazz, or stage, band and asked me to play drums. Why he did that, I haven’t a clue, but that was the beginning of my playing the drums. I can remember performing in the jazz band at school a few times. A couple of the songs we played had little drum solos in them. Some of my friends seemed to be really impressed with that. What notoriety!

About that time, several friends were beginning to play guitars. That led to different ones of us getting together to play. These were mostly just “practice” sessions with other “musicians” from the home town. Some of these legends were Jack Wilson, Glen Sisco, Mark Blacketer, John Brooks, and Gary Moreland. I convinced my dad to buy me a set of drums. We went to Pete’s Pawn and Music in Garland and bought my first and only set. I still have them today.

The next step was to form a band. A teen club was being formed and would need a band to play for dances. Of course the most important part of being a band was to have the appropriate name. That changed weekly for a while. We finally settled on “The Bod-dz,” due to Gary working at the funeral home. I don’t remember everyone who was in and out of the “band,” but Gary, Glen, John, and I wound up playing together until the older ones graduated from high school. We were joined for a while by Robert Joe Vandygriff and Gary Manning from neighboring communities. The teen club became known as “The Attic,” and was located on the top floor of the First National Bank in downtown Honey Grove. On weekends, the windows were opened and our rock and roll would filter out over the city. I’m quite sure Chief of Police Hoyt Ivey received numerous complaints about the volume.

My first experience with country music came one night when Terry Fortenberry and Troy Neal Kilpatrick asked me to fill in for their sick drummer. They were playing somewhere in Oklahoma at a club. It took them a while to convince the owner to let me in as I was not quite of age yet. Since I was not familiar with any of their songs, I just let them start it up, then joined in.

As some members of the band graduated high school and left, new members came into the band. I continued playing into my first year of college. Then my musical career came to what seemed to be the end.

Then in 1976, Gary asked me to sit in on a practice session with a country and western band that he and Boyd Hudgens were playing in. I drug my drums out of the attic at home, dusted them off, and, for the second time in my life, attempted to play country music. I met the rest of Bois d’ Arc Bottom that night and began some of my best friendships ever. I was asked to become a member of the band and did. We played several VFW’s and clubs around northeast Texas, finally winding up playing 5 nights a week at “The Water Hole” in Denison. We also played one weekend at the Grapevine Opry. In the next year we went to a recording studio in Dallas and recorded three songs written by Gary.

Playing with Bois d’ Arc Bottom was a great experience for me. It was also difficult, as I had just begun my coaching career. I had to miss playing often because of conflict with the coaching. I’m sure that was difficult also for the band, having a different drummer many nights.

When the band went our separate ways in 1977, once again it seemed that my involvement in music had come to an end. After about twenty years, Bob called and asked if we wanted to have a reunion. As Yogi says, “It was like déjà vu all over again.” I had been thinking the same thing. It is fun to get together now and play whenever and where ever. I hope we can continue for a long time.