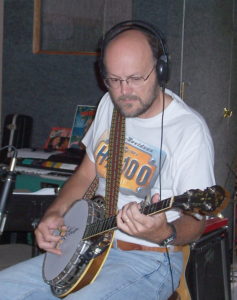 Boyd’s love of music began at a very young age. Growing up in Texas, surrounded by family, and friends of the family, who both loved music and played various instruments, Boyd soon found that he possessed more than just a love of music.

As a child, Boyd quickly learned to play ukulele, graduating to the guitar during the turn of his teenage years. He later became interested in the banjo. Against the advice of his Grandfather, Boyd attempted to learn Scruggs-style picking on his first banjo: a 4-string tenor banjo!

In 1973, a long-time friend of the family, Roy Free, placed a 5-string banjo in Boyd’s hands. His heart skipped a couple of beats. You might say it was “love at first sight.” Quickly adapting to the “five,” Boyd began to attend Bluegrass festivals in Texas and Oklahoma, honing his skills by playing with, and learning from, other musicians. He went on to win Championship trophies in both states between 1976 and 1979.

Boyd and long-time friend, Gary Moreland, from his hometown of Honey Grove, performed a live bluegrass show for several consecutive weekends on radio station KFYN in Bonham, Texas. They eventually formed the Bois d’Arc Bottom band during the late ’70s, which performed at night clubs, rodeo dances, and civic events throughout the area.

After a short time of playing country music in Texas dancehalls with his five-string banjo, Boyd’s interest turned to the instrument his Grandfather played: the Hawaiian “lap-steel” guitar. Sitting the lap steel on a stand to make it look similar to a pedal steel guitar, Boyd played various venues over the next few years until he purchased his first 10-string pedal steel guitar. At a seminar in Dallas, Boyd met Jeff Newman (Jeffran College of Pedal Steel Guitar) and subsequently traveled to Nashville on three different occasions to study under Jeff and the “World’s Foremost Steel Guitarist,” Buddy Emmons.

In 1989, Boyd, his wife Debbie, and their son, Kevin, moved to Paris, Texas, which is their home today. Kevin was an accomplished drummer and performed with Karl Louis & The Blues Drivers and The Gary Porterfield Blues Band. Kevin also performed with the band, Post Oak Savannah, and appears on their CD from 2006. He was also drummer for the praise and worship band at East Paris Baptist Church. Kevin lost his life in a tree cutting accident in October of 2015  (Boyd is also the regular steel guitarist at East Paris Baptist Church).

After thirteen years of constant weekend performances, Boyd now enjoys playing banjo, dobro and steel guitar at churches, area “opry” houses, recording sessions, and public events around the area.  You’ll find him performing with Wade White and other musicians in the Northeast Texas area.  Since retiring from L-3 Communications in Greenville after 37 years of service, he has completed his studio in Paris where he teaches banjo, pedal steel guitar, dobro, bass and rhythm guitar.  Check out his website at Stringbender Music. Boyd says, “You don’t have to read music to enjoy playing!”